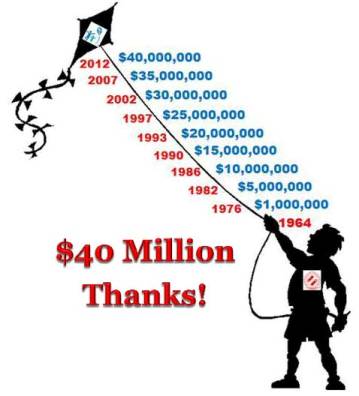 The Kinsmen Club of Winnipeg has donated $50,000 towards Cystic Fibrosis research.

Kin Canada, a Canadian service organization, is our oldest partner. For 48 years, Kin Canada’s continued commitment has made a difference in the lives of Canadians with cystic fibrosis. This year, Kin Canada surpassed the $40 million fundraising milestone– a tremendous achievement!

When Kinsmen and Kinettes first joined the fight against cystic fibrosis in 1964, children diagnosed with this devastating disease were not expected to live long enough to attend kindergarten. Today, almost 60 percent of Canadians with cystic fibrosis live well into adulthood, with many attending university, having families and contributing to our society in so many ways.

Every year, Kin members spend countless hours organizing and participating in fundraising events and activities such as golf tournaments, lotteries, galas, telethons, bake sales and road toll events to raise awareness and vital funding for CF research.
Cystic Fibrosis Canada is honoured to have such an outstanding partnership and friendship with Kin Canada. It is only through the incredible dedication and hard work of Kinsmen and Kinettes that this major milestone has been possible.

Thank you Kin Canada for everything you have done, and continue to do, in our fight against cystic fibrosis.KINgratulations on reaching your once in a lifetime $40 million milestone!